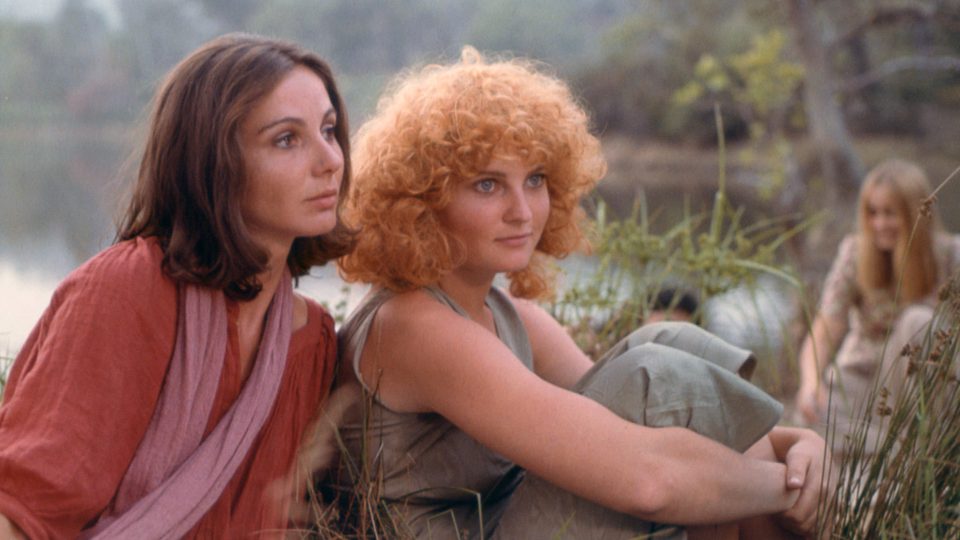 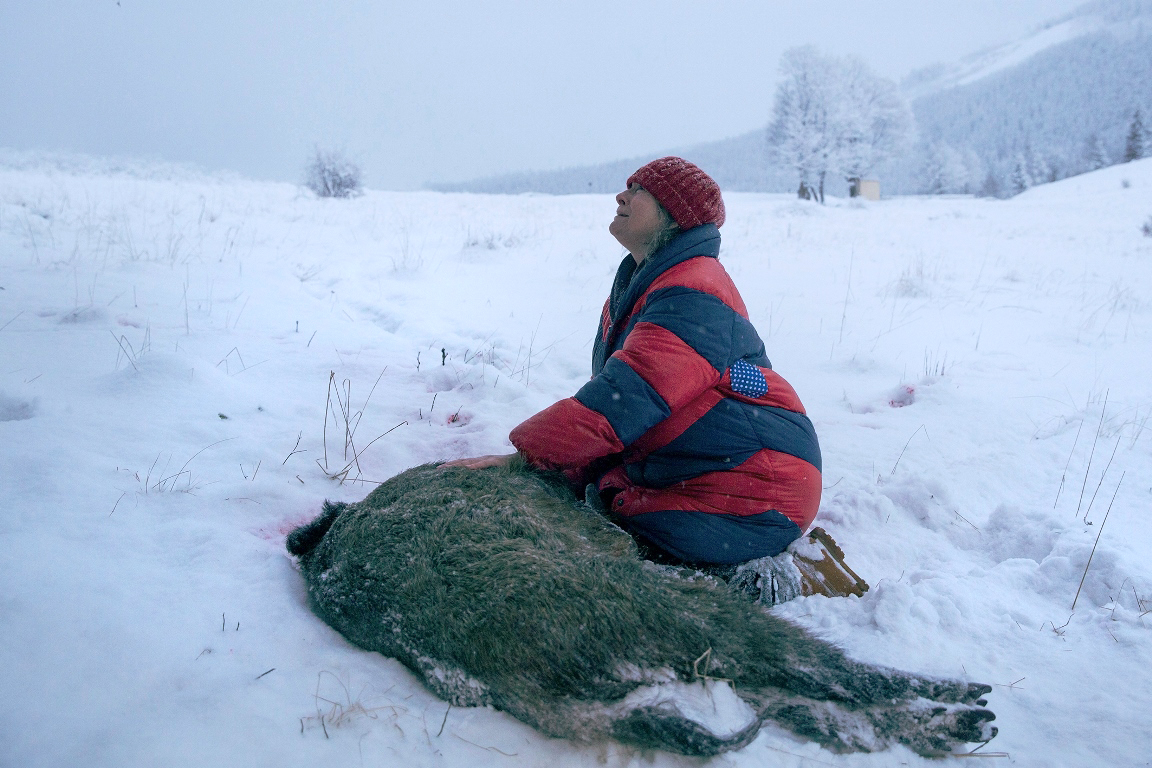 Agnieszka Holland and Kasia Adamik’s Silver Bear winning feature, Spoor (2017)—an adaptation of the novel, Drive Your Plow Over the Bones of the Dead, by Polish novelist and Booker Prize winner, Olga Tokarczuk—doesn’t strictly follow a single genre. Part crime story part melodrama, the film also contains elements of ecological horror. When in a small village in remote Polish forest, a number of men die suddenly, investigators suspect foul play. A middle-aged retired engineer, Janina Duszejko (Agnieszka Mandat), is convinced that the murders are committed by wild animals and point to an intra-species ecological warfare.

Duszejko (who prefers to go by her last name) is an existentialist skeptic. She doesn’t believe in God, or the afterlife, and reserves her feelings for nature instead. A loner, she teaches at a local school, but passes most of her time helping a budding translator with William Blake, or composing astrological charts. A middling astrologist, Duszejko nevertheless hopes to discover men’s dates of death from the stars. She claims to have found her own. À la Romantic Blake, she sees the world as inhabited by not just humans, but also the dead, and demons. Among those lost souls, in the novel, are Duszejko’s mother and grandmother. In the film, the loss we feel most keenly is of Duszejko’s two dogs, which go missing in mysterious circumstances.

The local police are not keen on Duszejko’s theories about animals turned killers. The footprints found at the crime scenes do point to the presence of deer. No human footprints are found, but this is natural: In winter snowfall is heavy and covers evidence. In an early scene, Duszejko is woken at night, and stumbles groggily to a neighbor’s house, where she finds him dead. As she heads out, she is startled by the deer standing in the snow, watching her intently. Again and again, she will experience the sensation that animals are watching her, expectant, or are directly leading her to the sites of murder.

The rural world in which the crimes take place is full of torment, of mutilated, slaughtered animal bodies, and aging, ailing, or murdered human ones. It is also predominantly masculine, governed by men’s pride, greed and thoughtlessness. Tokarczuk is more precise in the novel: Through Duszejko, we learn that most of the area’s men are retired, or else work on their unprofitable farms, sustained by the subsidies from the European Union. In other words, it is a world in which men’s status has been downgraded, and in which their wounded pride flares up, at everyone’s expense. If communist Poland ever had a feminist film manifesto, it was Holland’s A Woman Alone (1987), in which the protagonist, burdened by misery and hostility, robs money from the post office where she is employed. She elopes with her invalid hubby, is chased by the police, and dies a tragicomic death. In a way, Holland staged her own sarcastic, Eastern European version of Bonnie and Clyde (1967)—hapless and lacking in glamour. Barbara Loden’s disaster-prone heroine in Wanda (1970) also comes to mind.

Holland took a more fantastical turn in Europa, Europa (1990), a survival tale set during World War II. But her greatest achievement has been the haunting Olivier, Olivier (1992)—her most intimate film, and, along with Spoor, one that treats women with most ambivalence. In the idyllic French countryside, a small boy disappears on his way to school. His body isn’t found, but in the meantime, an impostor—or possibly, the real son, grown up—arrives. Tormenting uncertainty, competitiveness between sexes and hints of incest make Olivier, Olivier one the most mysterious and troubling films by a Polish filmmaker to date.

Similar darkness and uncertainty lurk in the more ambiguous parts of Spoor. When Duszejko is called in to the police station, she sits across from the grumbly officer who doesn’t deign to look up as he cross-examines her. The camera focuses on the man’s mouth in extreme close-up. The moment conveys Duszejko’s cognitive dissonance. In the shot-reverse-shot, we see the man’s lips and Duszejko’s eye. The lips are fleshy, unpleasant, the eye is wide and dark. Holland and Adamik abandon this dense psychoanalytic approach in most other parts portraying men’s denigration of women. Yet in some scenes, such as at an illegal whorehouse, with Playboy-like young women, appended with white bunny tails and ears, the noirish aura prevails, deftly portraying a world saturated with backwardness, and decadence.

The fluffy appendices are dehumanizing; they place women in the same hierarchical rank with the animals. One could argue that such a moralist framing makes no room for women’s agency, not to mention neatly draws the lines of good versus evil. In the novel, Tokarczuk focuses instead on the complexity of Duszejko’s anger. And we do catch some of those inflections, however downplayed, in the film. Duszejko (whose last name’s root, “dusza” means “soul) believes her rage to be holy, as if she were granted—by what authority?—the right to set things straight. Her righteousness is therefore full of blind spots, a far more problematic stance than we may gleam from the film’s revanchist bend.

Since Duszejko’s voice guides us only from time to time in the film’s voiceover, she remains to some extent impenetrable. We have less access to her physical body, which in the novel is clearly beleaguered by pain, by chronic paralysis, caused by an unnamed illness. Duszejko’s eyes also tear up, though she has no allergies, a suggestion of a psychosomatic basis. Little of this body as enemy, as painfully aware of its expiration date, remains in the film. What we see instead, clearly more aligned with Holland and Adamik’s vision, is a body that demands respect, yet evokes scorn and condescension, because it’s female and older. But what of the animal killers claim? In Spoor, Duszejko is repeatedly advised by friends and neighbors not to share her far-fetched theories, lest she wants to be taken for a crazy person. It doesn’t help that she bases them on astrology. Here the film and the book get muddled enough for it to be quite startling to realize that something in this theory does stick, after all. For no matter how wild Duszejko’s claims, they capture, albeit in a metaphorical way, the position in which our species finds itself today.

We are at the top of the food chain. We have conquered territory, harvested natural resources, tamed animals, learned to prevent diseases. Or have we?

The documentary, Unseen Enemy (2017), by Janet Tobias, presents a twist to this evolutionary tale. We have conquered and evolved, but in the latter part, we are not alone. Take the case of Ebola. Tobias interviews epidemiologists who trace the virus’s evolution. As we encroached on areas populated by bats, this nocturnal, reclusive animal began to starve. Deforestation and climate change did their worst. The bats moved into human areas, to feed on agricultural fruit. The disease they brought disease with them spread from the Liberian countryside to the cities, and in no time, went global.

Then come the domesticated animals. As Yuval Harari points out in his book, Homo Sapiens: A Brief History of Human Kind, the vast number of epidemics come from domesticated herds. Pigs, chicken, cows are ideal hosts for a wide number of viruses, the aviary flu and mad-cow disease being just two examples. Add the rising concern that a great number of farmers dribble regulations and inject antibiotics into cows, which may result in a future influenza outbreak of a much more virulent strain.

So yes, Spoor conveys a sobering fundamental truth. While we’re haunted by the deer staring at us with their glazed eyes, or by the stealthy run of a fox, the forces working against humankind are vastly invisible. The animals are mere hosts, mute messengers. The darkness that Duszejko senses everywhere, the universe conspiring, isn’t so much rooted in the demons from Blake, as it is microbial.

Counter to this truth, Holland and Adamik’s finale refers us back to man’s agency: Men, not animals, are the true perpetrators, after all; as in a biblical tale, Cain slays Abel.

In the biological context, this is an oddly comforting thought.