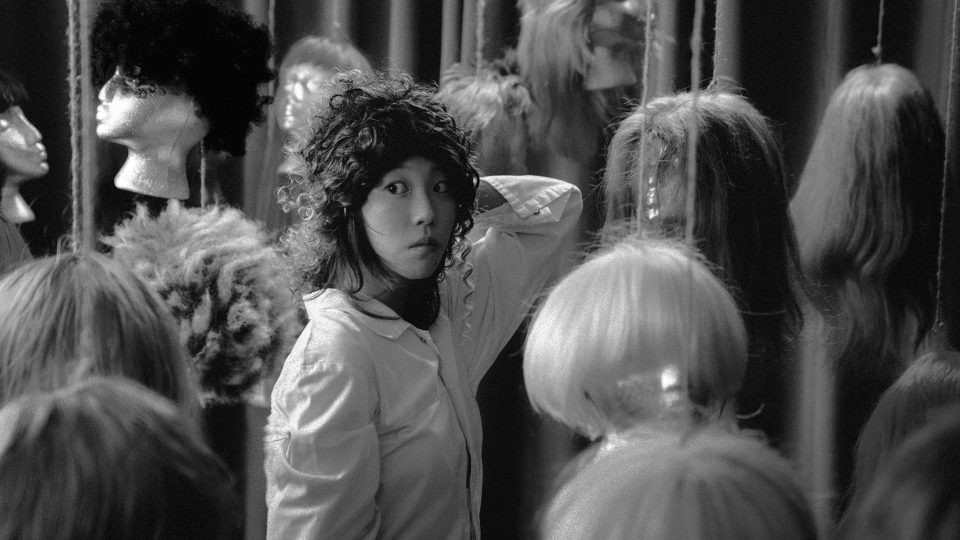 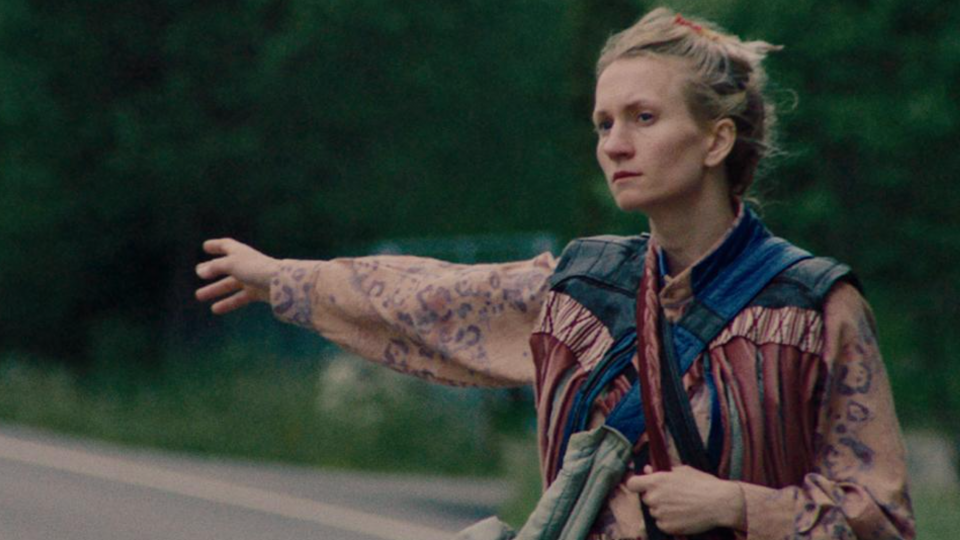 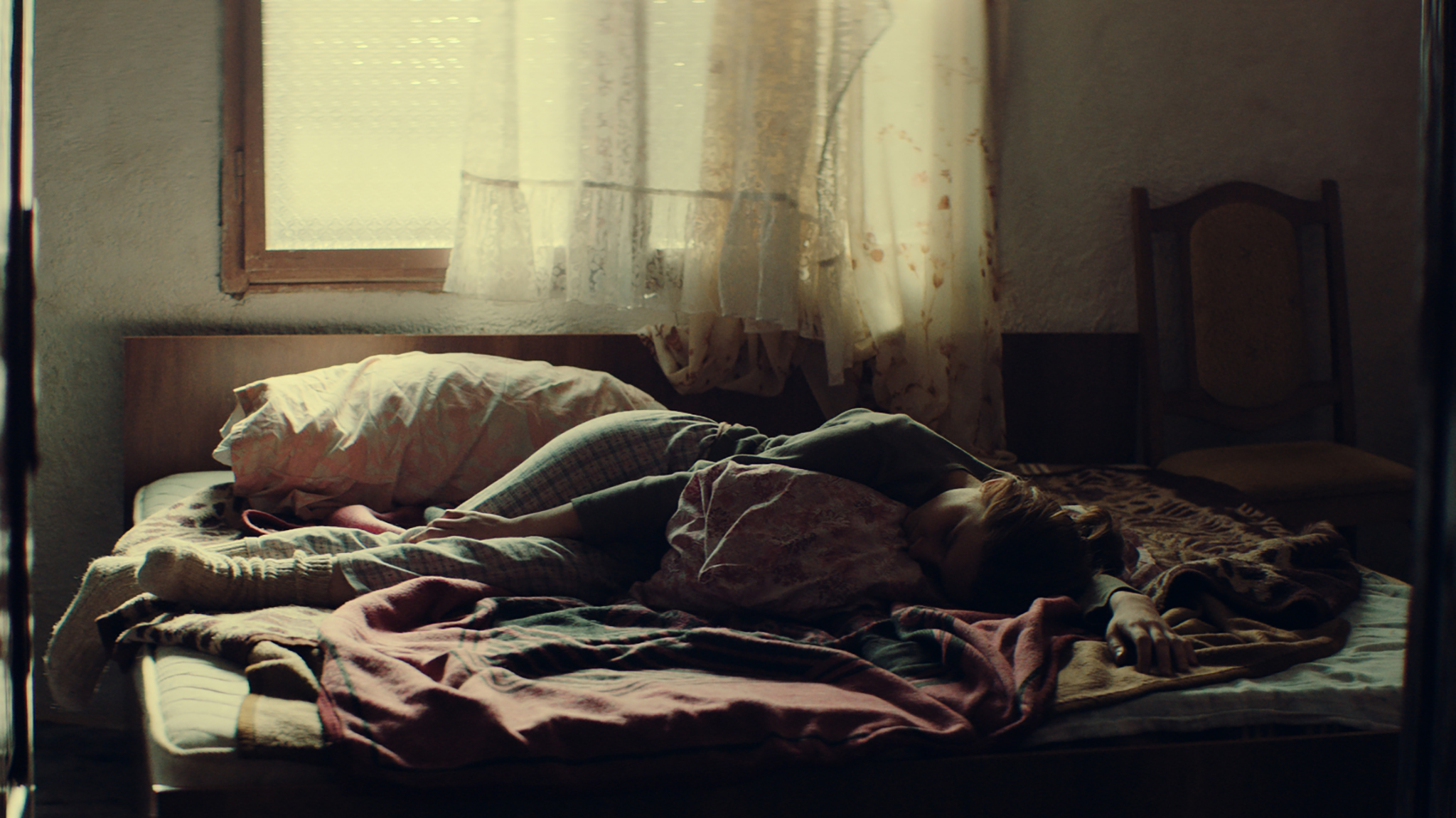 I’ve been loving films centered on girl anger. I’m sure that as a tentative grouping, it isn’t anything new. Nevertheless, one can’t help noticing — and appreciating — when a new crop of movies, such as Jessie Barr’s Sophie Jones (which I wrote about from Mar del Plata Film Festival) and Emma Seligman’s Shiva (see my piece from TIFF), springs up on the festival circuit.

IFFR features at least two such notable films by women directors. Karen Cinorre’s Mayday, which premiered at the Sundance Film Festival, and is playing at IFFR in the Tiger Competition is, for me, the lesser of the two — though it comes with considerably more hype. Ana (Grace van Patten) is a young (underage?) hotel worker. In the film’s opening, Ana’s helping out at a wedding reception, while being verbally abused by her male supervisor. When Ana goes off to fetch something in the back area, she is followed by her male tormentor. She then crawls into a narrow space — though from the menacing situation, it’s pretty clear that something has horrible has just happened to her — and emerges … in another time, another dimension. The overall Alice-in-Wonderland effect, with touches of plainly captured terror, is quite striking. Sam Frances’ (previously of Frances Ha) cinematography captures effortlessly the fluidity and wonder of this upside-down world, in which Ana meets a group of siren-like-war-combatants, led by the mischievous Marsha (Mia Goth). The sheer warmth of these portraits of Ana’s post-mortem companions gives this world a feeling of beguiling sensuality, of nearly adolescent flush.

Where Mayday strays is mostly in the specifics. It’s easy enough to follow Marsha and her troupe’s siren-like behavior, in which they use radio communication to lure young soldiers and entire ships to their shore, only to, as we can imagine, smother them in mist and leave them shipwrecked, or, more likely, dead. Mayday is thus a revanchist tale, in which some generalized evil meets its comeuppance. The mayhem gets a bit more specific when both Marsha’s hubby and Ana’s aggressor show up (from the real world, aka the hotel, where Ana worked and Marsha was going to get married). It’s here that Ana suffers her first moral qualms, and breaks away from the pack. And yet, the story grates. Why exactly use the background of war, or what kind of Sartrean equation is it to present these beguiling Amazon-like young women taking it out on men in all-out-gender-war? (if only there were satirical touches, à la Aristophanes, maybe we’d have more fun, but as it is, it’s pretty grim going). The outline of this war is so vague, I couldn’t shake the feeling that we’re not so much in some limbo as in a slightly more grown-up island from Wes Anderson’s Moonrise Kingdom. Mayday shares with Moonrise a sense of wonder, but it also feels trapped in and burdened by its conceit.

For something more earthbound, one needs to look no further than Norika Sefa’s tender yet bristling debut, Looking for Venera, also in the Tiger Competition. Kosovare Krasniqi gives a flawless performance as a young girl keenly observing and emulating her more emboldened friend (Rozafa Celaj, previously of Zana and Aga’s House). The film’s opening scene has Venera running through a patch of woods, only to find her best friend and the friend’s lover having sex on the forest floor. The voyeuristic moment, and Venera’s intense curiosity about sex, set off her on a course that brings her more fully under her friend’s influence, and pushes her further away from her own family — namely, her forbidding father, whose word is sacred in Venera’s household, and her mother, whom Venera partly blames for her own naiveté.

As in Mayday, girlhood comes under the strain of reality — the desire to experiment and to flaunt parental rules is met by the grim, impermeably patriarchal status quo (a status in which matriarchy is implicated, and made more fragile and subservient). But Sefa, who studied at FAMU, in Prague, the school that over years has given rise to Europe’s countless cinema luminaries — from the fiercely feminist Márta Mészáros and Agnieszka Holland to the wildly experimental Věra Chytilová, to name a few women directors, not to mention the likes of Jan Němec and Miloš Forman — has written a script that’s smart and nuanced enough to eschew easy, contrasty oppositions. Surely enough, Venera can’t find a common language with her father, but there’s at least one late scene at the family breakfast table when Venera’s grim challenge, “I’m a woman now,” is enough to send a small shiver through the room, upsetting the usual balance of power. Venera comes close to openly taunting her mother, but there’s also a recognition between the two friends that their mothers’ generation wasn’t given enough choice, and that what comes off as victimhood in one age may just have been a tactic of resilience, or endurance, in another. On the mother’s part (a role beautifully played by Erjona Kakeli), there’s a clear acknowledgment of her daughter’s growing sense of independence, and a quiet, fierce pride in seeing it take shape.

Venera’s greatest struggle is with herself. Similarly to the girl protagonist of Barr’s Sophie Jones, this young heart’s desire is nothing obvious: a mixture of repulsion, want, blunt desire, simmering self-reliance. Rather than flounder in a faux-Wonderland seeking her epic arc, Sefa’s heroine must test the limits of her strength, her independence, via small yet meaningful acts. There is no single violation that will define her course, but the scars and demarcations of men’s world, men’s power, are everywhere (not the least because this cameral story is set in the still war-scarred Kosovo). There’s no worldwide conflict in which Venera might test her mettle. Nevertheless, this young girl treads through her father’s house as if through a minefield set out for her alone. She may accept truce, some day, but first, she must work up her wrath.